Living in her adopted city of Bordeaux for more than 15 years, holder of a European Business bachelor’s degree and a master in marketing, then getting her MAI from KEDGE in 2006, Virginie worked for more than 12 years in e-commerce before working for herself as an independent consultant-trainer. “I’ve been writing ever since I was very young”, explained Virginie, “but it was only when I started my own blog (neleditesapersonne.com) in 2016 that I rediscovered that pleasure. Encouraged by some of the readers of my blog, I took part in the 2018 “Prix Littéraire Écrire Auféminin” competition, and was lucky enough to win. That competition is the reason why I was able to get my first novel, le Village, published with Michel Lafon”.

Le Village is a crime thriller that follows two stories at the same time. In it, Virginie addresses several themes: childhood, the working world, and the influences we all face and their impacts on our choices.

From the cover flap:
In the village, people look at you at an angle, without appearing to do so. But the man at the bar looks at you straight in the face.
It's enough to remember. Enough to decide, there, just like that, to kill him...
This is the story of a return to the past and a flight to the future. Of a love that has died, a factory that has closed. Of laughter under the pines, first beers… and then the Pantin. It’s about the ambitious and the modest. Those who leave, those who stay... . It’s the story of a vengeance that comes back to hit you, like grains of sand on a windy day. 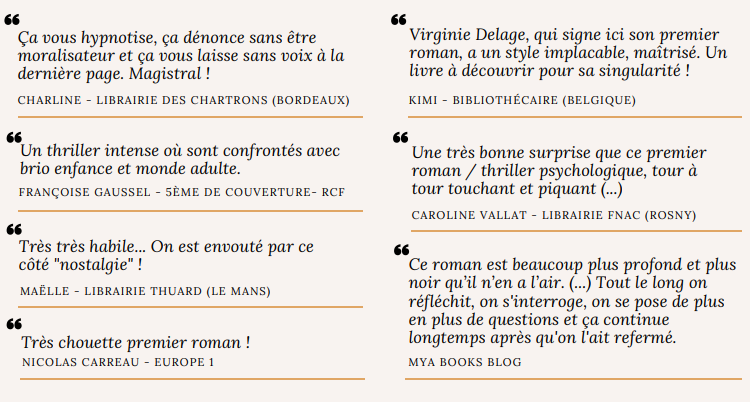 Motivated by these very encouraging reviews, Virginie is already working on her second novel.

To find out more and where to buy her book check out:

And of course at your local bookseller (which is even better)!